Sr. Catherine  Laboure as a Sister of Charity  illustration by the author

On January 22, 1830, 24-yr.-old Zoe Laboure´ embarked upon her religious life at the Hospice de la Charite in Chatillon. For three months she worked and studied as a postulant with such diligence and dedication that she impressed everyone who knew her. Sr. Sejole described her as “a soul of surpassing candor and purity.” Under Sr. Sejole’s instruction, Zoe rapidly progressed with her reading and writing. Her sister, Marie Louise, now Mother Superior of the Sisters of Charity at Castelsarrasin, continued to write encouraging letters, which Zoe deeply appreciated.

In April of 1830, Zoe entered the Motherhouse of the Sisters of Charity to begin her novitiate. She would now be known as Sister Catherine Laboure.´ Not for her the doubt, confusion, and homesickness of the typical novice! She had struggled for so long to reach this point, she now described herself as so happy she felt that she was “no longer on the earth.”

On April 25, shortly after Catherine’s arrival, a solemn ceremony took place in which the holy relics of St. Vincent de Paul were moved from the Motherhouse, where they had been hidden since the French Revolution, to a new cathedral built in his honor. This occasion was followed by a solemn novena to St. Vincent. One evening, at the end of the novena service, Catherine was privileged with a vision of the heart of St. Vincent, which appeared above a little shrine containing a relic in the chapel. She saw it again on the next two evenings.

The first time the heart appeared white, symbolizing peace and union for the two communities of the priests and sisters of St. Vincent. The second evening, the heart was dark red, which Catherine believed portended a change in government. For the first time, Catherine heard an interior voice, which said, “The heart of St. Vincent is deeply afflicted at the sorrows that will befall France.” The third night, the heart was bright red, and the voice told her that because of the intercession of Mary, the two religious communities would not perish in the coming trouble, and that they would go on to “reanimate the Faith.”

Now Catherine found herself with a dilemma: Here she was, barely a month into her novitiate, faced with the formidable task of telling her new confessor, Fr. Jean Aladel, whom she had only spoken to once before, about her visions! Though apprehensive at the prospect, she could not deny the interior insistence to tell him everything.

Thirty-year-old Fr. Jean Aladel, though a holy, prudent, and capable man, was also a hard taskmaster, cold and aloof in temperament. He and Catherine would clash often in the coming years. During the first revelation of Catherine’s visions, he urged her to remain calm and to forget about them, something which Catherine found difficult to do. In fact, she soon was given the grace of seeing the visible presence of Our Lord in the Blessed Sacrament, a phenomenon that lasted during the entire term of her novitiate.

On June 6, Trinity Sunday, she had a vision of Christ the King during the Gospel at Mass (the first saint to have such a vision in modern times). Suddenly, Christ’s royal robes, ornaments, and even the cross He held, fell to the ground. With sadness, Catherine intuitively knew that a change in the government of France was imminent. She dutifully reported this latest apparition to Fr. Aladel, who as usual advised her to put it out of her mind. This created great conflict within Catherine’s soul, as she was torn between the heavenly favors being bestowed on her, and obedience to her spiritual advisor, who was dismissing them as so much nonsense. Yet all the while, Catherine was being prepared for her great life mission. Her deep devotion to Mary, the years of spiritual development and sanctity, were all about to culminate in the high point of Catherine’s life.

On the evening of July 18, 1830, Catherine was tired from all the happy preparations the nuns had made for the next day’s celebration of the Feast of St. Vincent. Yet, a strange excitement and sense of expectancy prevented her from sleeping. Holding in her hand the small piece of St. Vincent’s surplice that each Sister had received that day as a relic, she fervently prayed to this great saint that she would receive what had long been her heart’s fondest wish: to see the Blessed Virgin. In an impulsive act of faith and devotion, she tore the tiny relic in two and swallowed half of it. Then, as peace and serenity flowed over her, Catherine drifted off to sleep with the thought, “Tonight I shall see the Blessed Virgin.”

About two hours later, she was awakened by a soft voice calling her name, and opened her eyes to see a little boy of radiant beauty standing by her bed, holding a lit candle. “Come to the chapel,” he whispered. “The Blessed Virgin awaits you.” Sensing Catherine’s fear of being discovered, he assured her that everyone was asleep. Catherine hastily jumped out of bed, donned her habit, and followed the child through the hall and down the stairs to the first-floor chapel.  She was amazed to see every lamp lit along the way, although they met no one.

Reaching the heavy, locked door of the chapel, the child touched it, and it swung wide open. Every chandelier and candle — even the altar candles — was burning brightly. “Like a midnight Mass,” Catherine thought. She followed the boy into the sanctuary, where he stopped next to the chair the Director used when giving conferences to the Sisters. Catherine knelt down. A few minutes later, the child announced, “Here is the Blessed Virgin!” Catherine heard a sound like the rustling of silk, and saw a lady descend the altar steps and sit in the Director’s chair. She looked at Catherine, waiting. Catherine stood in confusion and doubt, but again the child answered her thoughts and said,  “This is the Blessed Virgin.” Catherine knelt at Our Lady’s knee, resting her hands in Mary’s lap — a privilege that no other seer has ever been granted — and looked up into Mary’s eyes. Catherine would always recall this as the sweetest moment of her life. 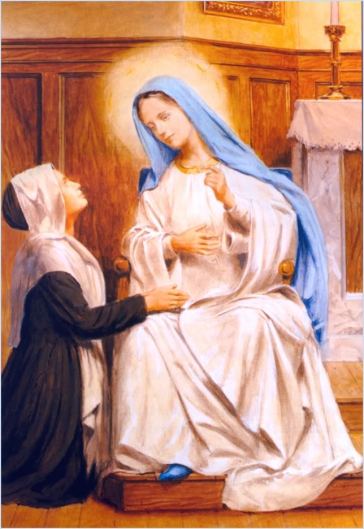 “My child,” Our Lady said, “the good God wishes to charge you with a mission.” But rather than reveal the mission immediately, Mother Mary instead spoke to Catherine of personal things, of God’s plans for her life, of trials she would face and how to deal with them. She told Catherine that God would give her the strength and wisdom to overcome any obstacles she would face in the fulfillment of her special mission, and that she would always know what God wanted of her.

Then Our Lady grew sad as she told Catherine of the many hardships that would befall France in the years ahead. At times Mary wept and spoke in halting phrases. But she reassured Catherine, “Come to the foot of the altar. There graces will be shed upon all who ask for them.”  She also promised Catherine that the Vincentian Fathers and Sisters of Charity would have the special protection of God, with St. Vincent and Mary herself always with them, granting them many graces. During this intensely personal audience with Our Lady — which lasted nearly two hours and is unique in the history of Marian apparitions — Catherine spoke freely, confiding in Mary and asking questions. Then suddenly, Our Lady faded and was gone.

Catherine followed the child back to her room, where he also disappeared. Catherine went back to bed, where she lay awake until morning, reliving every detail of this incredible experience. At her first opportunity, she told Fr. Aladel about the vision and all of Mary’s predictions.

A week later, on July 27, 1830, a revolution erupted in the streets of Paris, and King Charles was overthrown, fulfilling the prophecy of Our Lady’s words, as well as Catherine’s earlier visions. Intense persecution of the Church and clergy followed, but through it all the Vincentian Fathers and the Sisters of Charity were spared, as Our Lady had promised.

Despite his previous misgivings, Fr. Aladel was now faced with the fact that everything Sister Catherine had foretold as a result of her visions had happened. For Catherine, also, these terrible events served as proof to her of the reality of her experiences. She wondered about her “mission,” when it would happen, and when she would see Mother Mary again.

Coming in Part 3: The Miraculous Medal

Previous Posts in this series:

7 thoughts on “Catherine Laboure´: Saint of the Miraculous Medal-Part 2”